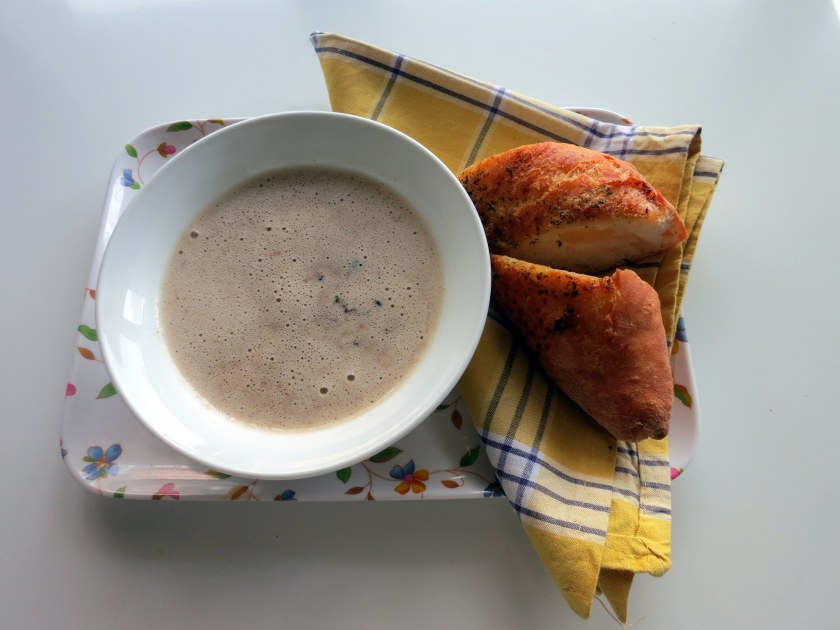 Today I forced myself to stay at home and get my tax return done (sigh… it’s that time of the year), so it’s the perfect excuse to make a comforting bowl of mushroom soup to go with toasted garlic bread.

This recipe works well with any kind of mushrooms.  I had some bits of chanterelle mushroom stems which I had saved from another recipe (they were too tough to be used in a stir fry) and I added a handful of morel mushrooms to make this soup.

1. Put the mushroom stems in a blender with a bit of water to make a puree.
2. Place the mushroom puree in a medium saucepan.
3. Add chicken stock and milk.  Bring to a boil. Reduce to a simmer and set aside.
4. Melt 2 Tbsp butter in a medium saucepan over medium heat.  Stir fry the garlic quickly for a few minutes until it is almost brown.
5. Add in the sliced morel mushrooms and stir fry for 5 minutes.
6. In a small bowl, make a slurry by adding a few tablespoons of the soup to the flour, stirring well to prevent any lumps.
7. Combine well the slurry with the morel mushrooms.
8. Stir the morel mushroom mixture into the soup and simmer for about 20 minutes.
9. Add salt and pepper to taste.
10. Serve immediately.

Note: In a pinch, open a can of Campbell’s Cream of Mushroom soup, and simmer with the mushroom puree and sliced morel mushrooms.  The chanterelle and morel mushrooms really jazz up canned soup! 🙂

Looking for another recipe?